Hit enter to search or ESC to close
FashionFeaturedShop

We love Boden here at the Updaters.    The clothes are good quality, fit well and they have some lovely colours and styles.   Their range suits people of most shapes and sizes, from 6 – 22.    Here is our summer edit – the top 10 pieces we think you should buy to cheer yourself up in lockdown.     *Between 17th and 21st May, Boden are offering 30% off plus free delivery and returns over £30 with code 6T2C* so take advantage of this offer now! 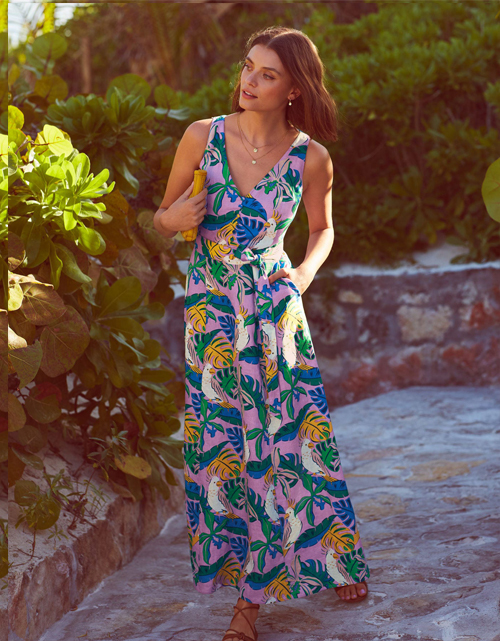 2. Trés chic!   This jumpsuit actually belongs on a yacht in St Tropez.  But, for the time being, Updaters’ HQ in East London will have to do.   But, if you’re like us, you’ll be putting this on, mixing a cocktail and playing ‘I’m in the South of France’.   Actually, it’s called ‘Santorini’ so make that, Greece.   The white stripe around the waist, on the navy version, is very flattering – if you didn’t have a waist to show off you will now, entirely through a visual illusion.    It also comes in hot red, if you’d rather sizzle around in that, rather than the navy.    The price is £110.  Get it here. 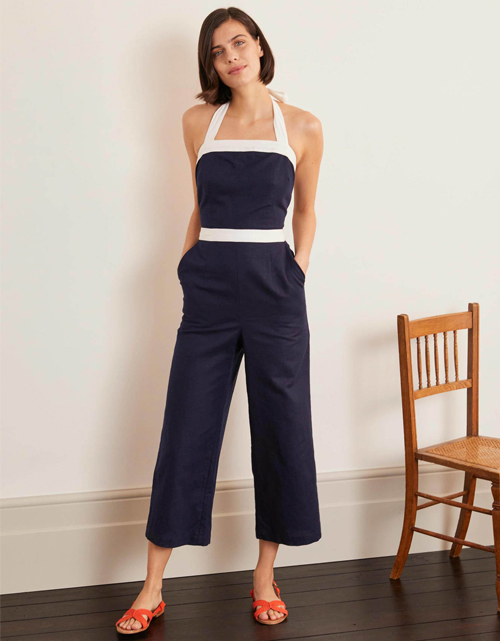 3. ‘Laura Linen’ embroidered dress.  One of the reasons we’re fond of Boden is that they like a bit of turquoise!    It’s a colour that suits most people yet other brands don’t seem to embrace it enough.   Boden, on the other hand, always have a few lovely turquois-ey pieces in their range.  They also like a bit of embroidery – and do it very well. So, we are pleased to see that they’ve combined them both in this breezy dress.    The dress also has sleeves for those of us who have ahem… a ‘less than firm’ upper arm.   If turquoise isn’t your bag, it also comes in yellow, white and chambray blue – all with different patterns of embroidery.   It’s £90. Buy it here. 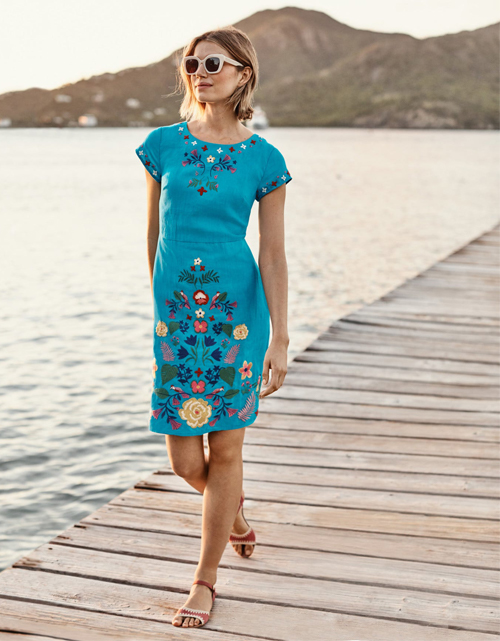 4. Gladiator sandals.   So we spotted these sandals on the model sporting the parrot dress and we HAVE to have them.    Some gladiator sandals can be a bit clumpy but not these – they’re really dainty and will make your feet look fab. We love the brown ones but if you fancy bling-ing up your outfit they also come in silver.  In fact, we might invest in both.     They are £80. Buy here. 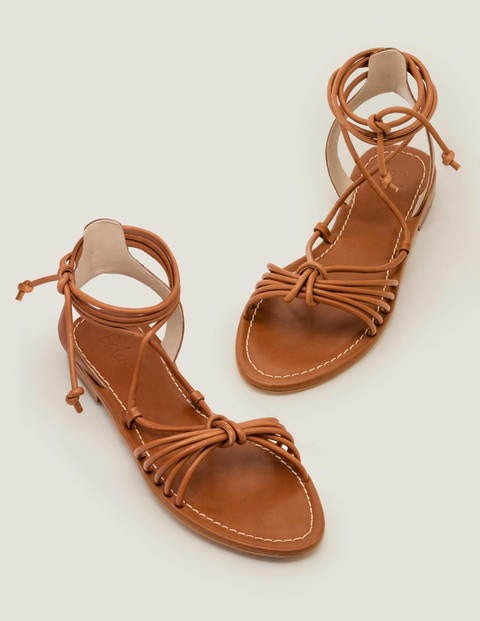 5. Daisy chinos.    Okay, so, if the truth be told, we want to look like the model in the photo – and be in the same dreamy location.   But, failing that, we’re going to invest in the trousers (and the shirt too, actually) and try to recreate the photo by standing next to a random scooter in the street.   These chinos are the business.  If you feel pink is a step too far in the trouser department, these comfy chinos also come in another eight colours, including navy, white, pin stripe and a really lovely misty blue. Yours for £55 here. 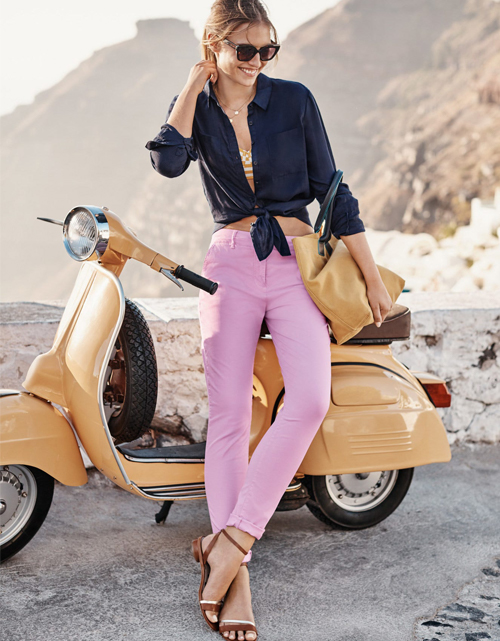 6. *The Boden Clearance Sale*.   We always like to have a nosey in the Boden sale as they have some great pieces that won’t look out of place this season.  They have plenty of summer dresses in there, for example so do take a look.    This ‘Helena Chino’ pink dress is just £24 (down from £60) and will do very nicely for this summer, thank you very much – and at the time of writing, it is still available in most sizes.  Go to the clearance sale here. 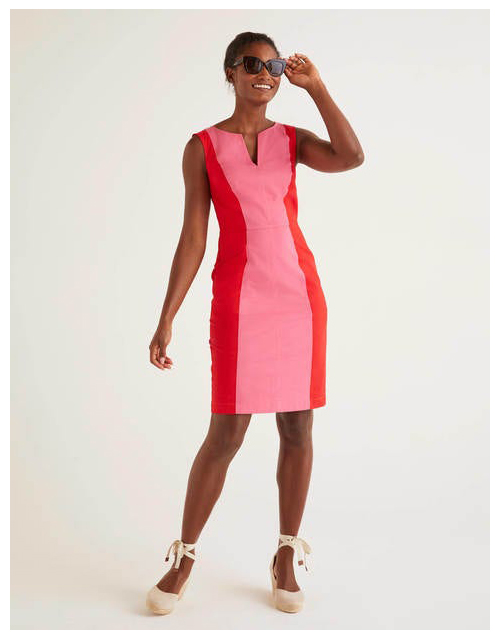 7.  Jersey maxi skirt.   A maxi skirt is a must for summer and  we are loving this skirt and top combo (it’s the turquoise thing again!).    Totally comfy, totally chic and great for beach, garden, work, wherever.  It comes in sizes 6 – 22 and you can also get it in navy and black.   The skirt costs £60, the vest is £18 and there is one in a similar colour, with short sleeves, if you prefer. Buy the skirt here. 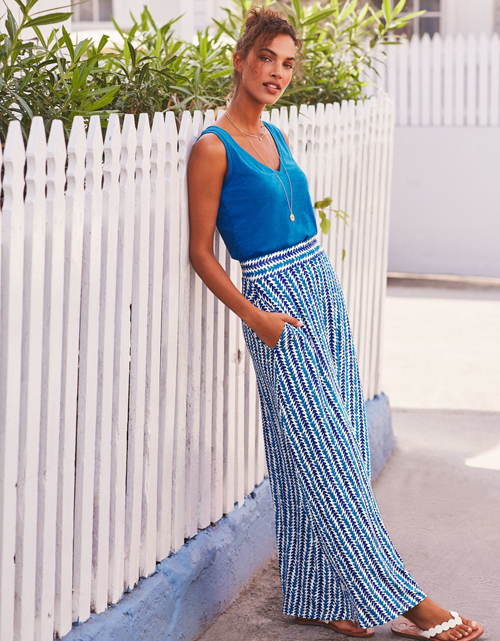 8.  Lilah maxi – multiway dress.     This lovely swirly pattern is all over the Boden website.    You might fancy the shirtdress in it as well.  We do, love, love, love this one though.    It’s multiway so you can wear it in 5 different ways – including flattering halter neck (as in the pic).   It is quite fitted but the team at Boden have cunningly added some features so that it fits, rather than clings.    The price is £90 but given that you get five ways to wear it, that works out at just £18 per style! (if that makes sense)…Buy the dress here. 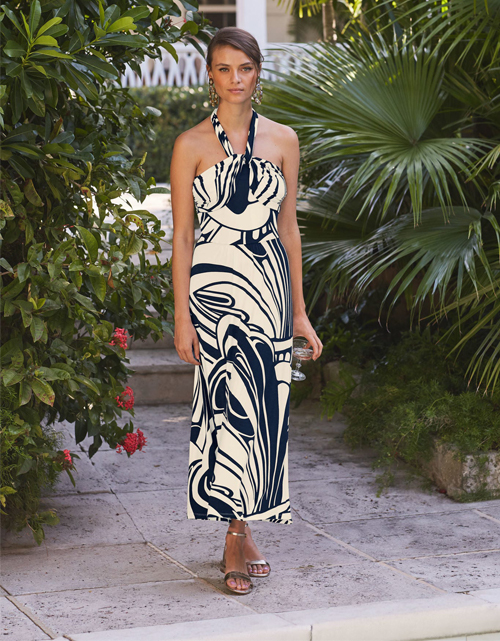 9. Laetitia Linen Shirt – White.   Everybody needs a cool, crisp white linen shirt in their wardrobe and this one, with its natty horn coloured buttons, is perfect.   Put on a pair of shades and smart trousers, or a skirt, like the one in the photo and you will look as if you have millions in your bank account and a second home in Monaco.     It also comes in a lovely orange and a deep blue.    The price is £60. Get yours here. 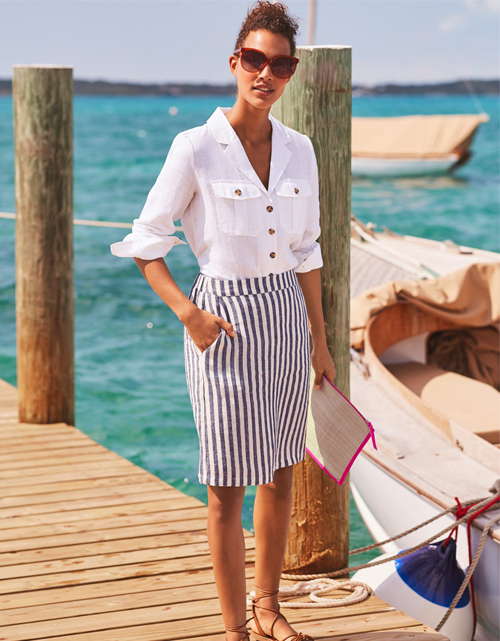 10. Flamingo swimsuit. There are birds flocking everywhere on the Boden website, this season.  We’ve had the parrots, now bring on the flamingos.    As well as this swimsuit, with its gold foil birds, there’s a white shirt with flamingos on, shorts, a T shirt, embroidered top,  bikini and some cute flamingo-covered clothes for children.  The swimsuit is £65 here. 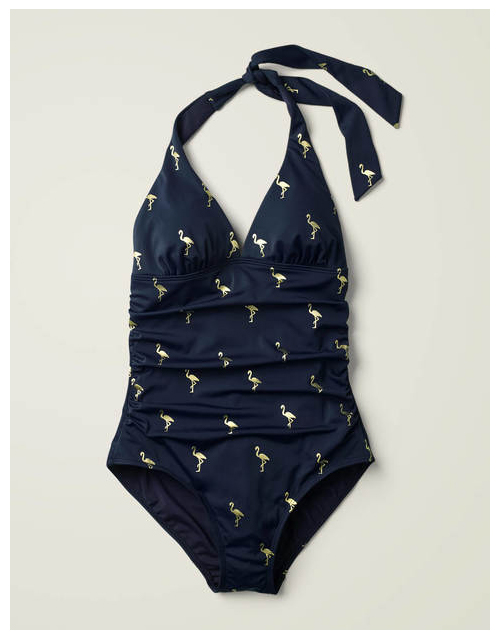 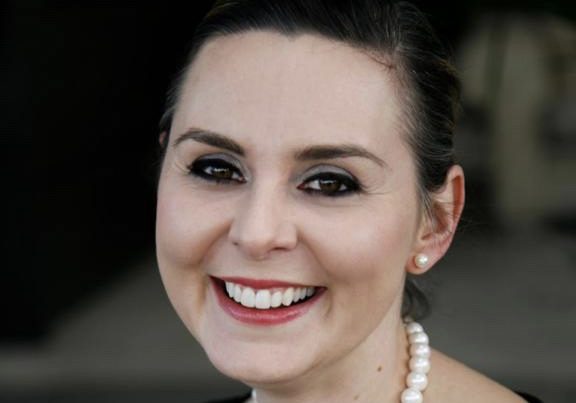 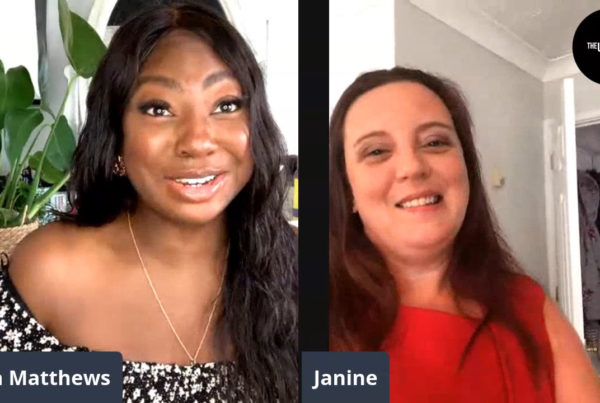 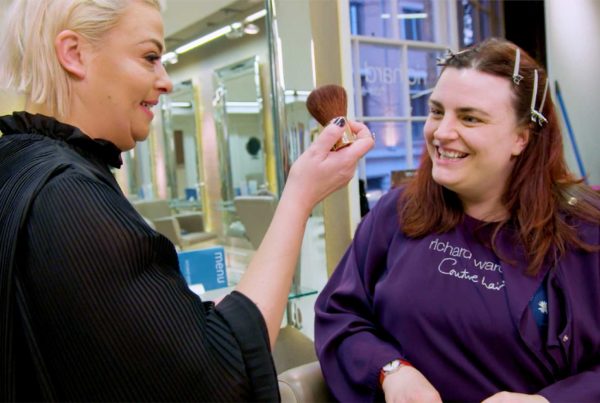 Would you like to become a partner, advertise with us or have some feedback on the website? We would love to hear from you.

Please complete the form and one of the team will be in touch.